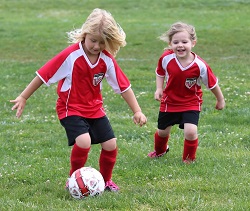 The purpose of recreational youth soccer in SASC is the development of the soccer playing ability of the child. Safety, fun, excitement, and player skill development are the primary focus of the program. Regardless of the ability of a child, everyone deserves an equal chance to play and to learn in a safe, positive, and supportive environment.

SASC also offers a higher level of play within its Competitive Program.

SASC is pleased to introduce a new Wednesday evening training program during January & February for all recreational soccer players born in 2016 and older. Sessions will be overseen by our Director of Coaching and will follow all current County and State guidelines.

Registration for the Spring 2022 season is open 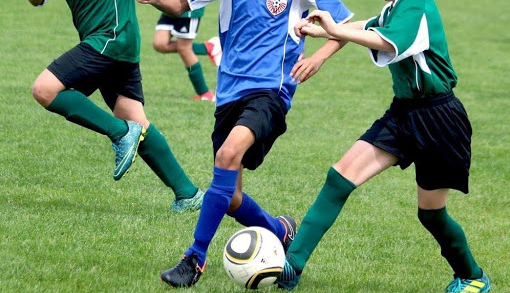 Register early to take advantage of the early-bird discount. Registration will close February 16.

Teams will be formed based on age divisions to be established by SASC prior to the beginning of each season. Only those players whose birth dates fall within the age divisions as established by the Rec. Director shall be eligible to participate. All players must provide proof of age for their first season of play. Age divisions may be combined at the discretion of the registrar. At the time of registration a player may request to "play up" one age division. Players are not allowed to "play down" in a younger age division. Registration of a player in the wrong division as a result of misinformation on the registration form may result in the player not being assigned to a team in the correct age division. If the error is found early enough, attempts will be made to place the child on a team in the correct division.

Team assignments within an age/gender division are done by honoring specific player preferences first, then by other factors such as: school, geographic distribution, and date of registration. No one is guaranteed a place on a specific team. Age Group Coordinators and the SASC Rec. Director may make changes to any team rosters to balance and improve fair play across an age division.

SASC recreational players may not be registered on any other team during the season. This includes competitive teams for any club.

All coaches attend the mandatory pre-season Coaches Meeting several weeks before the season starts. Coaches will receive their team's roster, with player contact information (assuming they have completed required background checks and are cleared to coach). Coaches will contact all players within the first week, identify themselves, give contact information and provide practice information. This is also a good time to recruit volunteers (e.g. Asst. Coach, Team Manager, Snack Coordinator, End of Season Awards/Party, ...) In order to start practicing, at least one of the coaches on the team has to have cleared their background check.

Objectionable conduct or behavior, including foul or abusive language by parents, players, or coaches during any soccer activity, including registration, will not be tolerated and may preclude players, parents, or coaches from participation in any activity sponsored by SASC. Anyone found giving knowingly false information to the Club Registrar or any other club official will be subject to disciplinary action which could result in immediate dismissal and revocation of his/her status as a member in good standing.

SASC reserves the right to make adjustments or modifications to the registration policy as it deems necessary to the best interest of the Club.

All SASC Coaches, Assistant Coaches and club volunteers must complete, sign and have on file with the registrar a completed Adult Disclosure Form, in addition to a Live Scan background check.

SASC contracts with the City of Sunnyvale for the use of its fields for practice and games. The City of Sunnyvale may close the fields if they feel that the conditions are not suitable for use, forcing the club to cancel practices or games. If fields are closed we must honor the decision, or risk losing our future access to the fields.

The primary means for determining field status is online via the club's SASCFields Twitter account which is automatically reflected on the homepage of the SASC website. You can also check field status at city parks with the City of Sunnyvale Parks and Recreation Turf hotline at (408) 730-7585.

If you do not confirm a cancellation you should go to the field for your game at the scheduled time. If conditions deteriorate prior to or during the game, it is the referee and coach's responsibility to suspend and/or terminate the game. The decision to suspend or terminate the game will be based on an evaluation of the conditions, the danger to the players or potential for damage to the field. DO NOT attempt to play games on days when cancellations have been announced.

Due to the difficulties of rescheduling games and in conformance with our policy of not guaranteeing a set number of games, the Club will not schedule makeup games due to cancellations of any nature. However, we do encourage coaches to make arrangements with their opponents to play during the week in lieu of one of their scheduled practices.

What Covid protocols will be required?

What coach training is available?

What are the game formats? Are they going to play ‘real’ Soccer?

My child has no prior soccer experience, can they play?

Is a uniform included? What other items are required?

When will we hear from our coach?